We had a spectacular time in Anaheim during the Tinker Bell Half Marathon weekend. The weekend was jam packed with running, park hopping, and roller coasters!  Let’s just say, that by the time we left Anaheim to go to L.A., I was pretty much fueled with the help of caffeine and perhaps adrenaline.

We arrived in Anaheim on Friday afternoon and after a quick stop at our hotel, we made our way to the Tinker Bell Run Expo to pick up our race packs.  Once we got our race bibs and shirts, we did a little shopping at the expo.

I went by Sparkle Skirts and picked up a skirt for race day.  The booth was packed as many Tink runners were also in the mood for a little sparkle in their step. 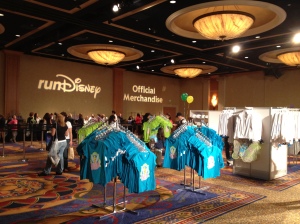 On Saturday, we made our way to the start of the Neverland 5K. The race began inside the Disneyland park, so we entered into Main Street to make our way towards the castle. As we were walking towards the castle, I had a chance meeting with Sean Astin. How cool was that?  As you can see, he was totally into Tink spirit as he was wearing wings! 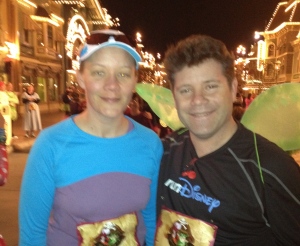 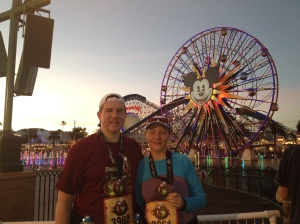 The 5K is fun, however, if you plan on running this race, make note it will not be a fast race. Much of the course has narrow running paths, and lots of congestion.

After our 5K, we headed back to the hotel to shower and get ready for a full day of fun at California Adventure.

On Sunday morning, we were up bright and early. Here we are, prior to leaving for the race. 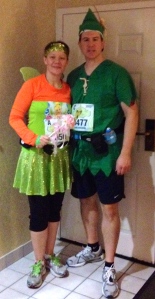 Ready to run the Tinker Bell half marathon

I had an excellent time, running the course. I have to say, the people of Anaheim are fantastic at cheering along the runners. There were several marching bands, and cheerleaders from various schools.  Also, I can’t forget about the Red Hat Society ladies.  They were out in full force cheering us on! There were some great signs along the course, but my favourite by far was this one… 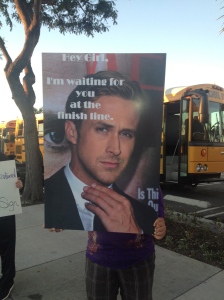 We found out at the expo that all male participants were put in corral C by default, therefore; ‘Peter’ and myself were not starting at the same time as I was starting in a corral ahead of him. This worked out perfect (or so we thought), as I had planned on stopping and taking lots of pictures along the way which would give ‘Peter’ lots of time to catch up to me, and that we would be able to finish the race together. Although, we did finish together, it came down to the very last minutes of our race. I had expected he would have caught up to me around the 15K mark, however, he was no where in sight, so I slowed my pace down, in the hopes that he would eventually meet up with me. It wasn’t until the last stretch of the race, where there is a hairpin turn that I saw him running up on the other side. I think I was about 200 meters from the finish, and I waited for him to run around the hairpin, so we could cross the finish line together. 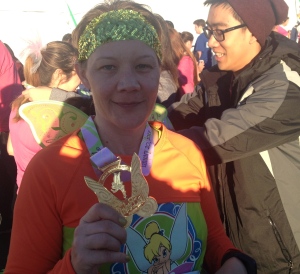 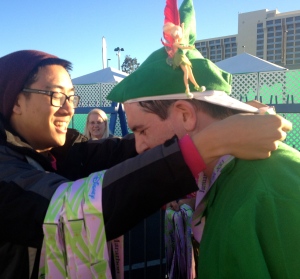